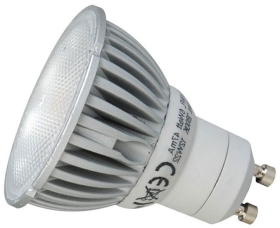 Product Discontinued
This item was discontinued on 9th December, 2016

Saving 80% in energy usage this Warm White Dimmable LED GU10 light bulb is a great replacement for an energy hungry halogen bulb. Offering excellent light output this lamp is perfect for spotlight applications. Lasting 50,000 hours this lamp is rated at6 watts, which is the equivalent of a 50 watt traditional halogen output.

Your saving would be approximately £158.40

We make every effort in answering your questions.

Lumens (Lm) are a new unit of comparison for types of light bulbs and other lighting products. The Lumen is going to be used in the lighting industry to describe lighting products with increasing frequency as the Watt slips out of use. Manufacturers ...

What Is An LED?

A LED&nbsp;is a semiconductor device which gives off light output when electricity is passed through it. LEDs are used in a range of Light Bulbs, and offer you a superbly efficient and low-energy way to illuminate your space. LEDs allow for a wide ...

Whats The Life On An LED Light Bulb?

You must be logged in to submit a review.

5th February, 2016 - Nick, United Kingdom
Great bulb. Had them before and will continue to use. Swift delivery

31st January, 2014 - Steve, United Kingdom
I was apprehensive about whether these bulbs would fit and provide the right colour of light for a kitchen. On both counts, I should not have been concerned. They are very impressive. Very similar in output and colour to a 50w halogen bulb. I bought these bulbs for the higher output rather dimming which I have not attempted.

25th November, 2013 - Julian, United Kingdom
Good brightness and colour temperature, looks very light a halogen, and works very well alongside existing halogen GU10s. Dims OK with the halogens, but not tried dimming on its own or with other LEDs. Recommended.

7th September, 2013 - Raymond, United Kingdom
Only had this for a month but very impressed with light output. Easily 35w output, maybe more but worth buying. Hope they last!

11th February, 2013 - NIGEL, United Kingdom
This is the best light I have found that looks like a normal light, but at fraction of the running cost.It comes on instantly not like some cheaper led\'s that take ages to warm up. cost may come down with time?

30th January, 2013 - David, United Kingdom
I\'ve tried several dimmable LED GU10s and find these good, working off a V-Pro trailing edge dimmer. I\'m hoping they will be reliable. LED colour temperature seems to be very subjective. They are just not going to be exactly the same as halogens, but you do get used to the colour with time. I find these a tad on the yellow side for \'Warm White\', hence the four stars. (I just love the \'daylight\' version though, for kitchen use.)

24th January, 2013 - Christoph, United Kingdom
The light output on these is great, they are quite a bit brighter than the 50W GU10s I\'ve tried to replace them with. Unfortunately the colour temperature is still considerably colder than a tungsten halogen lamp, so where I wanted to switch (in our kitchen), I\'ve now gone back to tungsten. I\'ve put them in the bathroom, where I don\'t mind that they deliver such a cold light, and the additional brightness is welcome there. They dim nicely though, I used a Varilight V-Pro trailing edge dimmer. They do have their use, and the brightness is amazing, but the cold harsh light they emit is still far off what you would want in a living space.

10th January, 2013 - Fergus, United Kingdom
Been using these to replace the halogen GU10s in our kitchen as they go and they are an excellent replacement. Light output is excellent and spectrum matches very well.

7th January, 2013 - Rick, United Kingdom
We have a ceiling mounted lighting array consisting of 2 racks of five. We have changed our bulbs regularly as soon as a lower wattage bulb has appeared. The difference in the room since fitting these LED lights has been tremendous. They are much brighter and the intensity of light is immediate, unlike our previous low energy bulbs which took a while to warm up and left the room with a pale yellow hue while they did. Our fittings are an open bulb style with just the \'barrel\' end of the lamp inside the fitting, so they fit perfectly and were remarkably easy and straightforward to fit, for some reason previous lamps seemed to be a struggle to discover the \'slots\'. Well recommended and over time the investment in power savings should pay back the outlay.

4th January, 2013 - P, United Kingdom
Good Colour, Replacing Sylvania lamps and gives quite a warm light. Dissapointing part is that they are slightly longer than the Halogen bulb and would not fit into the existing light fitting. I have used them to replace some other lamps.

Products similar to this item