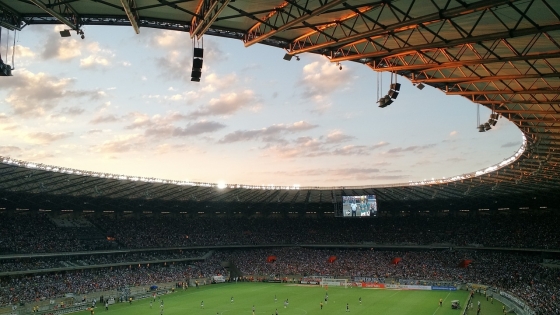 Southampton Football Club is at the forefront of the global energy saving trend with the announcement that it plans to install a complete LED floodlighting system in time for the kick-off of the 2014/2015 football season. The move will see the iconic St Mary\s stadium boast status as Europe\s first LED-lit stadium, a modernisation that is seen as a huge step forwards for the Football Association, the United Kingdom and Europe as a whole.

The upgrade to LED will allow the club to meet Premier League standards of broadcast lighting, offer live spectators an enhanced viewing experience and drastically decrease the energy use seen in conventional metal halide floodlights. Unlike the previous halide system, the new LEDs can be instantly switched on and off without the need for a warm up period which further adds to the system\s energy saving prowess.

While the new St Mary\s stadium system is a European first, LED has been making waves in the UK lighting sphere for quite some time. The high precision light, versatile colour temperatures, long lasting burn time and exceptional energy saving efficiency has made them the lighting solution of choice for a huge number of homes, businesses, commercial enterprises and outdoor settings across the nation. The Southampton move to LED is yet another win for the innovative technology and is hoped to further promote the many benefits of LED light bulbs to the public arena.

Steven Ellwood, Managing Director of leading UK supplier of LED lighting solutions retailer, BLT Direct says "Its fantastic to see large scale organisations making the switch to energy efficient LED lighting solutions. Stadiums such as the St Mary's are constantly in the public eye and are setting a great example for other football clubs as well as the everyday British businesses and domestic households."

By using the highest quality LED products on the market, the club has been able to counteract the commonly experienced issue of floodlight induced flicker which can cause broadcast issues during slow motion replays. While Premier League requirements dictate that pitches should have a maximum flicker rate of 6%, the new St Mary's system rings in at a minuscule 0.2%, making the stadium a continental leader in pitch illumination technology.
The move to LED floodlights is just one of many undertaken by huge employers and public bodies in recent years - councils across the country are moving to install LED street lights one by one, and other large businesses are getting on board and reaping the rewards.